We can offer you, one day or multi-day tours, accommodation and shuttle transfer.

Slovenia is the first country in the world to be declared a green destination based on the Green Destinations Criteria. Situated in the heart of Europe, Slovenia is a boutique country between the Alps, Mediterranean Sea, mysterious Karst with more than 11,000 karst caves and Pannonian Plain, rich with springs of healthy water. We are also proud that our capital Ljubljana was awarded the European Green Capital 2016 title. Welcome to Slovenia, the only country with the word LOVE in its name!

Slovenia has so much to offer and because of that is currently the number one tourist destination of Europe. We added the most scenic part of Italy like Trieste and Venice to our trips, considering, most of the tourists are landing at Venice airport.

Both residents and numerous visitors perceive Ljubljana as a city made to the measure of man. Ljubljana is classified as a mid-sized European city, but it has preserved its small-town friendliness and relaxed atmosphere while providing all the facilities of a modern capital. It is a very unique city dotted with pleasant picturesque places where you can expect all kinds of nice little surprises. During winter, its dreamy central European character prevails, and during summer its relaxed Mediterranean feel. Due to its geographical position, Ljubljana is a perfect base for exploring the many faces and beauties of Slovenia.

Ljubljana has preserved evidence of a five thousand year history including, among others, the remains of the Roman city of Emona and the old city centre with its medieval castle, Baroque façades, decorative portals and uneven roofs. Other significant bits of the city mosaic are picturesque bridges across the Ljubljanica river and the vast Tivoli park, which stretches into the very city centre. Ljubljana’s present appearance is partly due to the Italian Baroque and partly to Art Nouveau, which found expression in numerous buildings constructed after the earthquake of 1895. In the second half of the 20th century, it was the world famous architect Jože Plečnikthat put an indelible personal stamp on his native Ljubljana. The city’s appearance was further shaped by his students and a new wave of renowned young Slovenian architects.

A free mountain bike tour is now available in cooperation with Golovec trails biking community to see a glimpse and appetizer of what we do.

A mountain bike tour starting from center of Ljubljana to the Golovec trails park, & choose the path based on your riding style & experience. 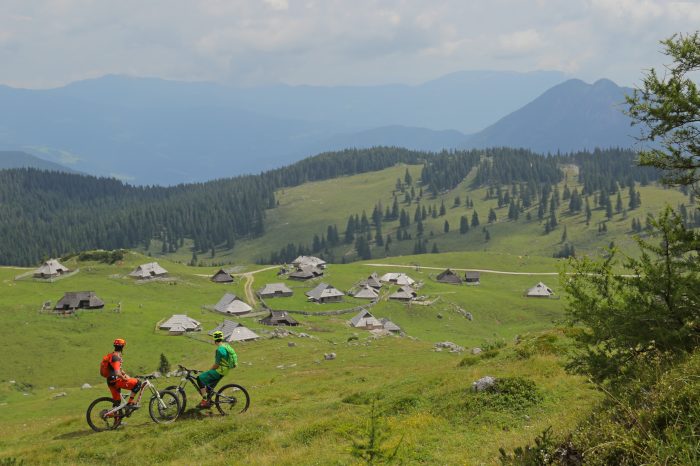 This tour first destination is Velika Planina. The tour can be tailed to suit almost all types of cyclist riding styles, fitness and skill levels.